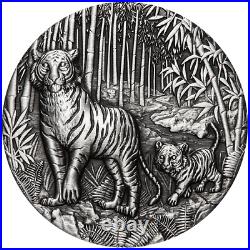 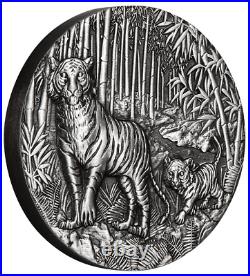 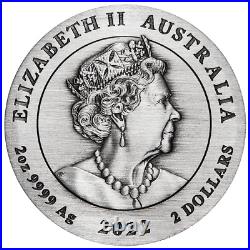 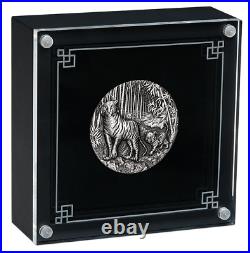 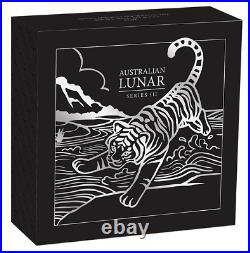 2022 Year of the Tiger 2oz. 9999 Silver Antiqued Coin – Lunar Series III. With the tones and surface abrasions of an ancient artefact, this 2oz silver release portrays our 2022 Year of the Tiger design in exceptional detail. Those born under the sign of the Chinese lunar tiger in 2022, 2010, 1998, 1986,1974 and each 12th preceding year are said to be natural leaders blessed with courage, charm and confidence. The Australian Lunar Series III 2022 Year of the Tiger 2oz Silver Antiqued Coin is struck by The Perth Mint from 99.99% pure silver and issued as legal tender under the Australian. No more than 1,888 of these coins will be released worldwide. The coin’s reverse portrays a stylised representation of a tiger cub following its proud parent across rocky terrain. In the background a river is depicted flowing through the bamboo. Also included in the design is The Perth Mint’s’P’ mintmark. The obverse of the coin depicts the Jody Clark effigy of Her Majesty Queen Elizabeth II, the weight and fineness, the 2022 year-date and the monetary denomination. The coin has been individually’antiqued’ to give it a unique finish conveying the surface abrasions of an ancient artefact. As a result of this treatment the appearance of each coin may vary. The coin is housed in a classic display case with a clear lid decorated with a silver geometric design. The case is packaged in a beautifully illustrated shipper portraying the story of how the tiger became an animal of the Chinese lunar calendar and is accompanied by a numbered Certificate of Authenticity. The shippers of future animals in the Lunar Series III will, when arrayed together, form a diorama depicting the ancient myth of The Great Race. Silver Content (Troy oz). Minimum Gross Weight (g). ABOUT THE PERTH MINT. Established on 20 June 1899, two years before Australia’s Federation in 1901, The Perth Mint was the last of three Australian colonial branches of the United Kingdom’s Royal Mint (after the now-defunct Sydney Mint and Melbourne Mint) intended to refine gold from the gold rushes and to mint gold sovereigns and half-sovereigns for the British Empire. Swan Bullion Company is proud to be an authorised distributor for The Perth Mint’s bullion and numismatic products. During periods of high demand, delays may occur. All precious metal sales including bullion and numismatics are final. Were also a boutique retailer of precious metal products that include jewellery, rounds, coins, bullion, nuggets and numismatics. Visit Us: Swan Bullion Company Suite 7/2155 Albany Hwy Gosnells WA 6110. Sign up to our newsletter for special deals. This item is in the category “Coins\Coins\Australian\Decimal”. The seller is “swanbullion” and is located in this country: AU. This item can be shipped to Australia, United States, Japan, Germany, Hong Kong, New Zealand, United Kingdom, Canada, France.