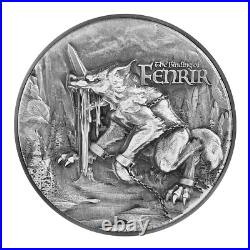 2021 Chad The Binding of Fenrir 10,000 Francs Ultra High Relief Mintage 500. 2021 CHAD THE BINDING OF FENRIR 2OZ SILVER HR PROOF. This remarkably fine 2021 Chad The Binding of Fenrir 2oz Silver HR Proof coin depicts an incredible story drawn from Norse mythology. The stunning design minted in the new technique – Bi-Metal Plus, captures a magnificent sense of the story’s account as handed down through the ages. THE STORY AS RECOUNTED BY THE MINT. Raised in Asgard by the gods, Fenrir was a giant wolf whose jaw could stretch from the earth to heaven. As he grew increasingly bigger, he became too strong to be controlled and the gods began to fear that he would break free and wreck havoc in all the worlds. As a result, they attempted to trick Fenrir into binding himself by challenging him to break free from being chained as a show of his strength, but Fenrir did so easily. Eventually, the gods made a chain that was impossible to break. To trick Fenrir into binding himself, Tyr, the God of War, had placed his arm into Fenrir’s mouth to convince him and eventually lost it when Fenrir bit down on it upon his capture. As Fenrir fought against his shackles, he was stabbed in the jaw by a sword. Fenrir howled as the sword pierced through him, and it is said that the saliva that flowed from his mouth formed the river of Van, and there he would lay until Ragnarok. A crucial chapter in Norse mythology, the Binding of Fenrir is an incredible story of deceit, fear, and power. This piece expresses these elements to a beautiful and artistic effect – the strength of Fenrir through the defined 3D lines across his body, the look of anguish brought to life in his eyes, and the flowing of the river from this mouth. The production of this magnificent 2021 Chad The Binding of Fenrir 2oz Silver HR Proof coin has been made possible only through a new minting technique known as Bi-Metal-Plus. The process begins with an 11.5 oz copper core within two layers of 999 fine silver. This results in a large 80mm diameter, double that of a normal collectible bullion coin. The 11.5 oz copper core adds tremendous bulk and weight without the extra cost of an equivalent amount of silver weight. This also allows for the super ultra-high relief strike that brings alive the coin’s incredibly detailed design. 2021 Chad The Binding of Fenrir 2oz Silver HR Proof. Produced with new minting technique Bi-Metal-Plus. Contains 2 oz 999 fine silver around a 11.5 oz copper core. Both obverse and reverse are beautifully antiqued. Extremely limited mintage of only 500 pieces for worlwide distribution. Obverse: Displays a stunning, original stylized Norse symbol filling the center field. Within the rimband at the top is displayed the Coat of Arms Du Tchad. Inscriptions at the rim include REPUBLIQUE DU TCHAD. Reverse: Features a detailed stylized scene that depicts the binding in chains of Fenrir and the sword piercing through his jaw. Inscriptions include, “The Binding of Fenrir” in a fine script-style. Coin comes encapsulated in a finely-illustrated display box and includes a numbered Certificate of Authenticity. Get Supersized Images & Free Image Hosting. Create your brand with Auctiva’s. Attention Sellers – Get Templates Image Hosting, Scheduling at Auctiva. Com. Track Page Views With. Auctiva’s FREE Counter. This item is in the category “Coins & Paper Money\Bullion\Silver\Coins”. The seller is “scottloos” and is located in this country: US. This item can be shipped to United States.