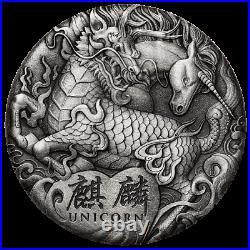 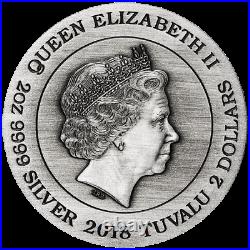 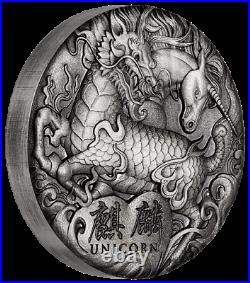 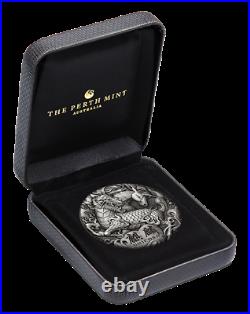 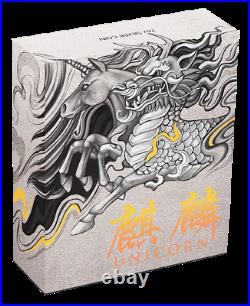 · 99.99% pure silver. · 2oz Rimless Antiqued Coin. · Tuvalu legal tender. · Extremely limited mintage of 1000. · Beautiful presentation packaging. · Numbered Certificate of Authenticity. In ancient Chinese culture the appearance of the legendary qi lin was believed. To coincide with the imminent birth or death of a great leader. The creatures name is a combination of the two characters – qi (male) and lin. (female) – and it was therefore considered to signify yin-yang harmony. The qi lin was portrayed with an equine body covered with the scales of a fish. And either antlers or a single horn the latter responsible for it being referred to. As the the Chinese unicorn. It was often depicted surrounded by fire while also. Reputed to be able to walk on water. While the qi lin may look terrifying, it had such a benevolent nature that it never. Walked on grass or ate living vegetation. Similarly, the horse-like unicorn, with a single horn projecting from its forehead. Has been portrayed since antiquity including the Indus Valley Civilization more. Than 4,500 years ago. Derived from the Latin terms uni (single) and cornus (horn), the unicorn was. Illustrated in Celtic, Medieval and Renaissance European art as a creature of. In modern times the fabled creatures are believed by some to. Have mystical healing powers. Even though the origins of these auspicious creatures in ancient Eastern and. Western folklore are unclear, each lives on in contemporary visual arts. Literature and popular culture. The unicorn also represents Scotland in the. Royal Coat of Arms of the United Kingdom of Great Britain and Northern. The coins reverse depicts exquisitely detailed representations of a qi lin. Surrounded by a stylised representation of fire and water, and a unicorn. Chinese characters for qi lin and the English word unicorn are included in the. The Ian Rank-Broadley effigy of Her Majesty Queen Elizabeth II, the monetary. Denomination, and the 2018 year-date are shown on the coins obverse. No more than 1,000 of the Qi Lin and Unicorn 2018 2oz Silver Antiqued Coins. Each coin is housed in a classic display case within an illustrated shipper and. Accompanied by a numbered Certificate of Authenticity. This coin has been individually antiqued to give it a unique finish conveying. The surface abrasions of an ancient artefact. As a result of this treatment, the. Appearance of each coin may vary. Silver Content (Troy oz) 2. Monetary Denomination (TVD) 2. Fineness (% purity) 99.99. Minimum Gross Weight (g) 62.27. Maximum Diameter (mm) 40.50. Maximum Thickness (mm) 6.00. Designer Ing Ing Jong. The item “2018 Qi Lin (Unicorn) 2oz Silver Antiqued High Relief Coin” is in sale since Thursday, August 20, 2020. This item is in the category “Coins\Coins\Australian\Decimal”. The seller is “coinsaustralia_official” and is located in Sydney, New South Wales. This item can be shipped to Australia, North, South, or Latin America, all countries in Europe, all countries in continental Asia, New Zealand.