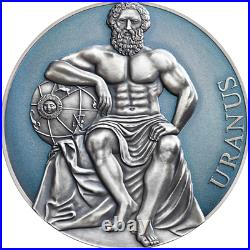 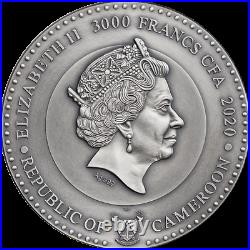 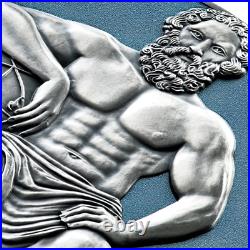 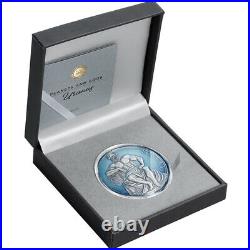 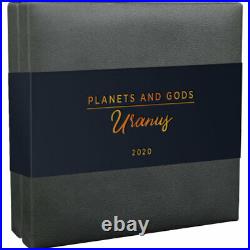 Uranus Planets and Gods Coin. Kilinskiego 2 , 35-005 Rzeszow Poland. Uranus Planets and Gods 3 oz Antique finish Silver Coin 3000 Francs CFA Cameroon 2020. This amazing coin is the third release of the Planets and Gods series, which comes after the Mars coin. The coin is dedicated to the seventh planet from the Sun Uranus. It is the planet whose name is derived directly from a figure of Greek mythology. Uranus was the ancient Greek deity of the Heavens and the earliest supreme god. On the coin, he is depicted as a gigantic man with long muscular arms and legs, holding the zodiac-wheel. The coins background is tinted in blue-green colour in order to match the planets colour. The colour of Uranus comes from its atmosphere. This planet is composed mostly of hydrogen, helium, and methane, with trace amounts of other elements and molecules. This substance causes the blue-green colour of Uranus. Uranus, with its featureless, blue-green disk, is the only planet to be named after a Greek and not a Roman god. He ruled the universe, and his name means sky. Discounts on new coins for registered users. Digital printing, High relief. The item “Uranus Planets and Gods 3 oz Antique finish Silver Coin CFA Cameroon 2020″ is in sale since Tuesday, July 28, 2020. This item is in the category “Coins & Paper Money\Coins\ World\Africa\Other African Coins”. The seller is “topworldcoins” and is located in Rzeszów. This item can be shipped worldwide.