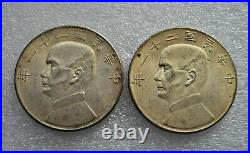 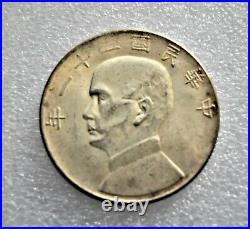 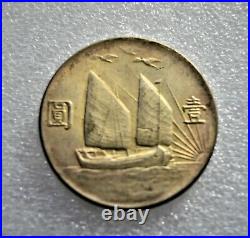 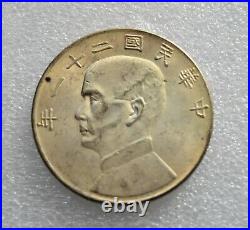 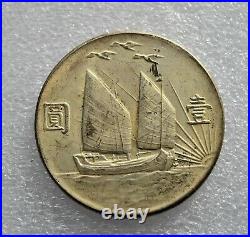 Pair of 1932 Republic China 21th year silver dollar coins Sun Yet-sen China junk with three birds Pre-wwii War mobilization fundin after the Great Depression. Size 39.5 mm and weight 26.8 grams. It is very hard to find similar tone and torn as a matching pair since every coin has its own circulate history for almost hundred years. Sun Yat-sen is a great national hero and a great pioneer of the Chinese democratic revolution. The Revolution of 1911 initiated and led by him completely overthrew the rule of the feudal dynasty that lasted more than 2000 years in China. In order to allow the world to remember Mr. Sun Yat-sen’s great achievements, during the period of the Republic of China, a commemorative silver coin with different layouts was produced. Among them, the image of Sun Yat-sen on the front and the golden sun on the back are the rarest among sailors in the 21st year of the Republic of China. In the twenty-first year of the Republic of China, Sun Yat-sen was like a three-bird sailboat. The silver coin was one of the rare varieties in the collection of silver coins. The silver coin was issued in the 21st year of the Republic of China (1932) and was coined by the Shanghai Central Mint, commonly known as Three Birds. The front side of the silver coin is a portrait of Sun Yat-sen’s menswear. The top of the portrait is the phrase Twenty-One Years of the Republic of China. The back of the figure is a double-masted sailing boat on the sea. There are three flying seabirds above the boat. The right side of the sailboat is on the sea. The sunrise over the sea and the 9 Mansing Lines symbolize the “national transport”, “easy sailing, ” and the rising sun. The silver coin was the first Shipyang silver coin issued by the Nationalist Government on the eve of the publication of the Casting Bill, which was once designated by the Ministry of Finance as a commemorative coin. Soon after the issuance of this currency, Sino-Japanese relations have become tense. Some people say that this pattern implies an ominous sign that Japan invaded China. Because of the rising sun on the eastern side of the coin, the pattern of a pair of sailboats and three birds caught the attention of the patriots at the time. Folklore: The sailboat on the right side of the sea rises to the shadow of Japan (because of the Japanese flag that is the Sun Flag). Because of Japans invasion of China, peoples anti-Japanese patriotic sentiment rose. This currency is considered to be a disgrace to the country and is an ominous sign. At that time, the Nationalist Government also felt that the birds of the sky are the emblems of foreigners and overruled Chinese sailboats. They felt that it was inappropriate. So they immediately withdrew this version of the silver coin to keep the rumor from circulating. At the same time, it revised the design of the new design, removed the rising sun and the three bird designs, and was ready to re-issued and distributed. However, when Sinki Steel was molded, it was already the beginning of the Republic of China in early 22nd. The mint then turned the coin form 21 years. It was changed to “twenty-two year” and then issued again. This is the most common sight today in the Republic of China in the past 22 years. The “three bird coins” casting time is shorter, the amount of casting is small, handed down more rarely. The above Sun Yat-sen’s twenty-one year Republic of China coined the words “21 years of the Republic of China” on the top of the double sail coin. The lower part is the side image of Sun Yat-sen. The center of the back is cast with a “circle” and a pair of galleons are riding the wind and waves. The currency has clear text, exquisite designs, vivid portraits, and excellent casting techniques. The collection is well preserved and its color is natural. Although it has a slight rust, it does not interfere with its appearance, but it is more natural and delicate. The portrait of Sun Yat-sen in the currency is vivid. Innovative design, superb caster; has a high collection value and artistic value! As the investment in collections continues to heat up, YinYuan is extremely hot in the coin market. YinYuan is likely to become a dark horse in the field of collection investment in the future, and its prices have been rising. All signs indicate that investing in works of art is the most intelligent choice, and thus it is also most suitable for private collections. Friends of the collection and investment, compared to the Republic of China twenty-three version of Shuangfan currency, this piece of the Republic of China in the twenty-first year is even more rare. The item “Pair of 1932 Republic China 21th year silver dollar coins Sun Yet-sen” is in sale since Thursday, March 26, 2020. This item is in the category “Antiques\Asian Antiques\China\Figurines & Statues”. The seller is “yehlinaloha_1″ and is located in Honolulu, Hawaii. This item can be shipped worldwide.