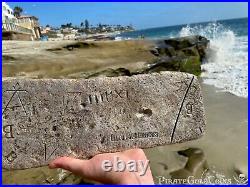 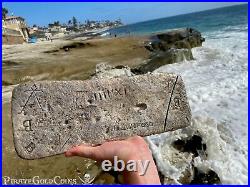 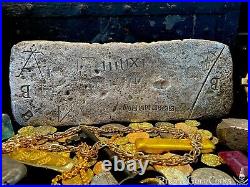 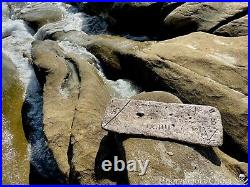 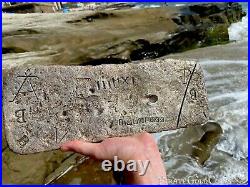 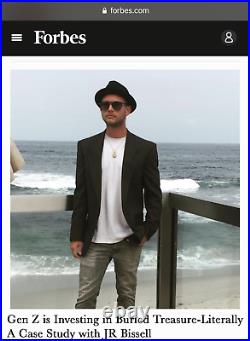 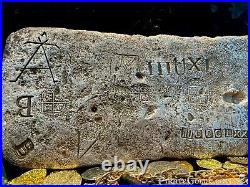 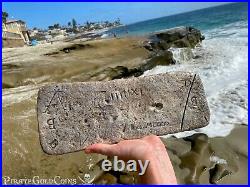 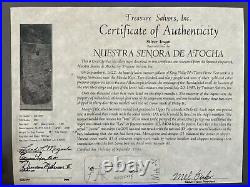 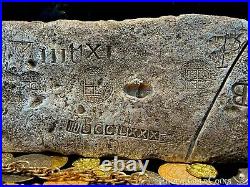 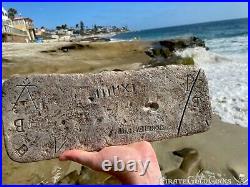 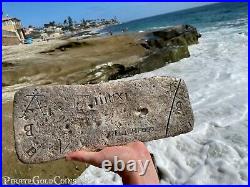 Atocha 1622 Shipwreck Silver Bar Slice PERFECT GRADE 1.0 & DATED DATED DATED 1621!!!!!!!!!!!! Pirate Gold Coins Shipwreck Treasure Bar. ATOCHA 1622 SHIPWRECK SILVER BAR SLICE approx. INGOT FACTOR PERFECT Grade 1.0 of 1.0 scale, PERFECT GRADE! W/ (5) FIVE Strong Royal Stamps! Photo COA by MEL FISHER TREASURE SALVORS w/ Seal!!! ATOCHA SILVER BAR INGOT is approx. 14 x 5-1/4, HUGE BAR! PERFECT GRADE Class Factor 1.0; Carat 2380, TSI #85A-S895 (Discovered in Motherload in 1985 Atocha); listed on Manifest 3011 (Register / Page C494). Manifest comments: (Shipper/owner) J. See the COA, which reflects this Atocha Bar originally weighed in at 93 lbs 5.28oz, which was then cut or shaved down to just the upper layer which remains at approx. 1/2 thick, retaining ALL the original and Historical Markings (Stamps, serial #s, Owners and Shippers). This particular piece has the HIGHEST Purity 2380 or 2400 kt. As marked right on the bar (MMCCCLXXX) center – bottom. The Highest Class factor (Grade). Whats particularly nice about this piece is that it has the FULL SIZE (14 x 5) without weighing over 85lbs, which is difficult to handle, carry or lift (increasing the desirability of this Rarely seen weight). We are Aware of ONLY 5 or 6 BAR SLICES in existence. This beautiful ATOCHA SHIPWRECK BAR is such a beautiful piece of History and we are honored to offer it on the Open Market!! (These photos are not photoshopped believe it or not). ATOCHA 1622 SHIPWRECK HISTORY. Our Lady of Atocha, sank in 1622 off the Florida Keys, Havana bound for Spain. Her galleon filled with all the treasure: gold, silver, copper, tobacco, gems, and jewelry. She never made it out of Veracruz to Havana to join the fleet of the Tierra Firme (Mainland) Fleet. Her treasure was so enormous that it took 2 months to load the galleon full (in the summer of 1622 in what is now Panama City). She set sail 6 weeks behind schedule on September 4th, 1622. Only two days later on the 6th, she was pushed onto the coral reefs by a severe Hurricane Approx. 35 miles west of Key West. All but 3 sailors and two slaves drowned as her hull was ripped apart. Due to the galleons sitting in 55 of ocean and yet a second hurricane hitting (further scattering the treasure). The following month, salvage efforts were severely hindered. With the help of Indian slaves, over the course of many years, almost half the treasure was recovered from the Santa Margarita. This was mainly accomplished, crudely enough, by sending slaves down in a brass makeshift diving bell (with a window on the side). Many of these efforts ended in death. Spains shipwrecked treasure caused nothing short of devastation to their finances, which were in dire need of funds due to their 30 year war. Although the Spanish recovery efforts were somewhat successful over 10 years, they never did find the Atocha! Finally, after 16.5 years of searching she was finally discovered in 1985 by Mel Fisher (Treasure Salvors), producing her gold and rare Muzo emeralds. Most of the gold and silver coins were minted between 1598 to 1621 (there were also earlier dates, even as far back as the early 1500s on board). Treasure is still being brought up to this day. Wall Street Journal Article on The Atocha 1622 Shipwreck (Jan 14, 2012). He searched doggedly for the treasure for 16 years (and tragically lost his son and daughter-in-law when a salvage boat capsized during the search). In 1985, the Fisher team came upon a large portion of the wreckage. Three large silver bars, two small gold “finger” bars and one gold disc that went down with the Atocha will be featured in Freeman’s Jan. 25 Fine English & Continental Furniture & Decorative Arts sale. In the early 1600s, the Spanish monarchy dispatched armadas regularly to stock up on gold, silver and gems from the Americas to help fund its army. The Atocha was one of several ships that fell prey to Caribbean hurricanes en route home from Cuba and sank off what would become Key West, Fla. On the Atocha, 260 people drowned and about 70 tons of treasure were lost. Mel Fisher’s heirs have stayed in the family business and continue to mine the Atocha wreck and several others. Two Florida museums, the Mel Fisher Center and Museum in Sebastian and the Mel Fisher Maritime Museum in Key West, always have Atocha objects on display. The most valuable portion of the shipthe stern castle, where the onboard nobility stashed their personal artifacts and spoilsstill hasn’t been discovered. Betting on new technology, the younger Mr. “As long as the weather’s good, ” he says, we’re on the site. The item “ATOCHA SILVER SHIPWRECK TREASURE BAR DATED 1621 PIRATE GOLD COINS ESCUDOS FLEET” is in sale since Tuesday, July 20, 2021. This item is in the category “Antiques\Maritime\Other Maritime Antiques”. The seller is “pirategoldcoins” and is located in La Jolla, California. This item can be shipped worldwide.