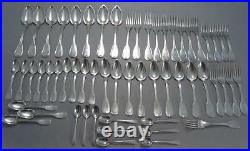 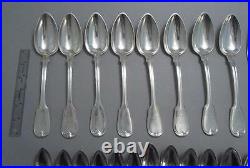 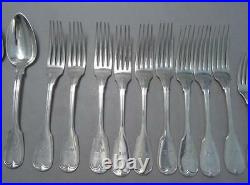 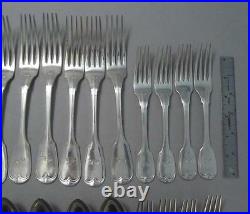 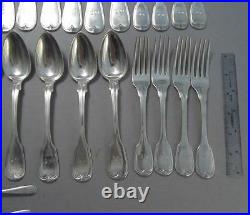 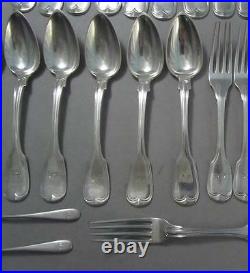 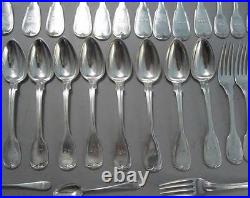 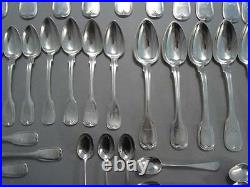 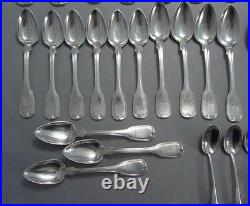 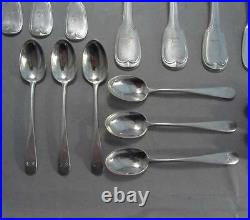 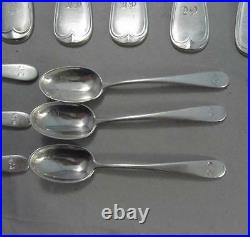 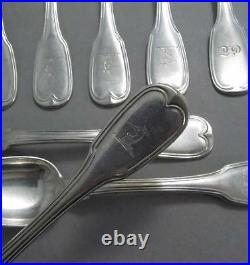 This is a rather unusual set of coin silver. It was made by Samuel Kirk of Baltimore Maryland. The original owner was George Tiffany. A few teaspoons have the Baltimore marks for 1828, and all except the demitasse spoons would be before 1846. She was a daughter of Commodore Matthew Perry famous for his expedition opening trading ports of Japan to the West, and the sister of Mrs. One of his sons drowned as a child, another died after serving with Roosevelt. They were evidently on very good terms with Belmont one of the richest bankers in America a representative of the Rothschilds in America. Unfortunately I can find out little else about George Tiffany except he evidently bought Commodore Oliver Perry Farm in 1865. The silver pieces are monogramed GT or have a dog head crest and a letter T on the other side. This is a rare set of Southern silver, not just for the owner but for its relative completeness. Fiddle thread is often quite heavy, especially this set, and therefore more usable than the lighter more common fiddle pattern. We also have pieces of very similar Northern coin silver which would round out the set, also available to the purchaser. You will notice that besides the normal pieces the set has dessert spoons, which are perhaps the most useable pieces and rarely included in American silver sets. This is the perfect set, if you are looking for useable silver, but would also work for an historic home setting. 9 Dinner Forks mono. D GT in old English, 8. Long, total weight of 28.15 troy ounces. 5 are marked S. 4 are marked SAMl Kirk 10.15. 9 Luncheon Forks, 8 mono. D GT, 1 engraved with a hound crest with T mono. D on the back. Long, weigh 19.35 total troy ounces. All are marked S. D with GT and are 6. 4 are engraved with the hound crest, and are 5. Total weight 14.25 troy ounces. They are all marked S. 11oz save one that has a Baltimore assay mark and a letter F. Total weight 19.65 troy ounces. D GT on front, marked S. 3 have the hound crest and the same mark. 8 Tablespoons w hound crest, marked SK 11oz. Total weight 26.6 troy ounces. 9 Demitasse spoons, earlier style. Kirk & Son 11oz. Total weight 4 troy ounces. Of course American silver from this period do not have knives or salad forks. I do have modern American fiddle thread knives available although I would recommend ordering knives from England as our modern knives are smaller and lighter. In total there are 112 troy ounces of silver in this set. Which probably makes it cheaper than modern silver on a per ounce basis. Get Images that Make Supersized Seem Small. Attention Sellers – Get Templates Image Hosting, Scheduling at Auctiva. Track Page Views With. Auctiva’s FREE Counter. The item “Set Fiddle Thread Southern Coin Silver Kirk G. Tiffany c. 1835″ is in sale since Tuesday, January 24, 2017. This item is in the category “Antiques\Silver\Coin Silver (.900)”. The seller is “labarbe” and is located in Saint Louis, Missouri. This item can be shipped to United States, Canada.