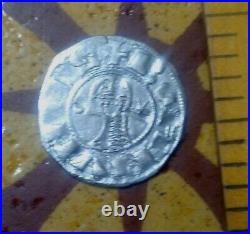 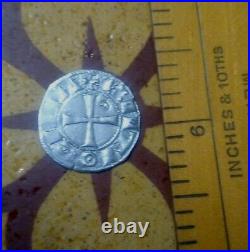 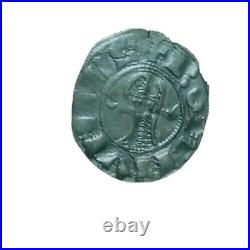 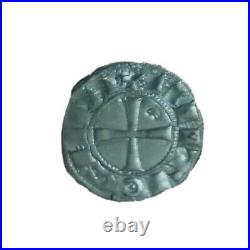 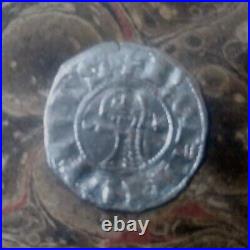 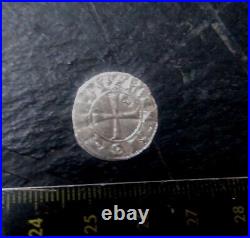 Knights Templar genuine Medieval Silver Coin Bohemond III c 1163 -1201 Antioch in his helmet and armour 18mm 0.76g Bohemond III of Antioch, also known as Bohemond the Child or the Stammerer French: Bohémond le Bambe/le Baube; c. He was the elder son of Constance of Antioch and her first husband, Raymond of Poitiers. Bohemond ascended to the throne after the Antiochene noblemen dethroned his mother with the assistance of Thoros II, Lord of Armenian Cilicia. He fell into captivity in the Battle of Harim in 1164, but the victorious Nur ad-Din, atabeg of Aleppo released him to avoid coming into conflict with the Byzantine Empire. Bohemond went to Constantinople to pay homage to Manuel I Komnenos, who persuaded him to install a Greek Orthodox Patriarch in Antioch. The Latin Patriarch of Antioch, Aimery of Limoges, placed Antioch under interdict. Bohemond restored Aimery only after the Greek patriarch died during an earthquake in 1170. Bohemond remained a close ally of the Byzantine Empire. He fought against Mleh, Lord of Armenian Cilicia, assisting in the restoration of Byzantine rule in the Cilician plain. He also made alliances with the Muslim rulers of Aleppo and Damascus against Saladin, who had begun to unite the Muslim countries along the borders of the crusader states. Since Bohemond repudiated his second wife and married an Antiochene lady, Patriarch Aimery excommunicated him in 1180. Bohemond forced the Armenian rulers of Cilicia to accept his suzerainty in the late 1180s. He also secured the County of Tripoli for his second son, Bohemond, in 1187. However, Saladin occupied almost the whole Principality of Antioch in the summer of 1188. To preserve the peace with Saladin, Bohemond did not provide military assistance to the crusaders during the Third Crusade. The expansionist policy of Leo I, King of Armenia, in the 1190s gave rise to a lasting conflict between Antioch and Cilicia. Bohemond was captured in 1194 by Leo, who tried to seize Antioch, but the burghers formed the Commune of Antioch and expelled the Armenian soldiers from the town. Bohemond was released only after he acknowledged Leo’s independence. New conflicts emerged after Bohemond’s eldest son, Raymond, died in 1197. Raymond’s widow, who was Leo’s niece, gave birth to a posthumous son, Raymond-Roupen, but Bohemond’s younger son, Bohemond of Tripoli, wanted to secure his succession in Antioch with the assistance of the commune. The elderly Bohemond seems to have supported his son during his last years. The War of the Antiochene Succession began with Bohemond’s death and lasted until 1219. This item is in the category “Collectables\Masonic\Other Masonic”. The seller is “antiquity111″ and is located in this country: GB. This item can be shipped worldwide.