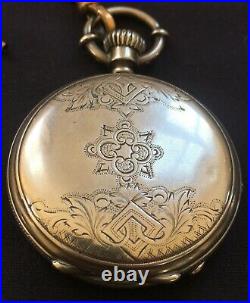 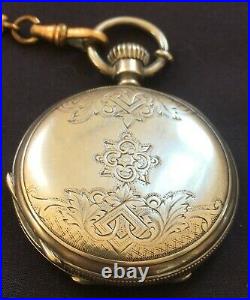 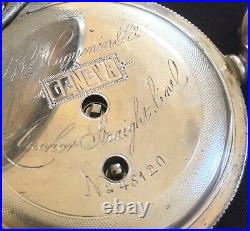 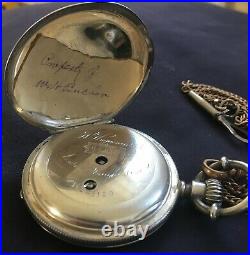 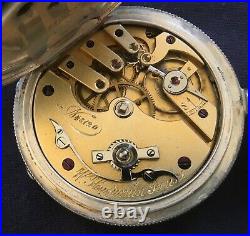 Antique HUGUENIN & CO Coin silver Hunter’s case pocket watch with key and chain. The case is in good shape, it opens as designed. The front and back both have an etched design. The edge of the case is ridged like a coin. Little sign of wear. A small dimple on the front cover (at about the six o’clock position). Inside the front cover :”Warranted Coin silver” and “20”. On the inside of the hinged back cover. On the outside of the Hinged cover over the mechanism: W. HUGUENIN & CO, GENEVE, Anchor Straight Line” “No. On the inside of the Hinged cover over the mechanism. 48120″ & “16” & a chevron symbol with “Argent imprinted. On the rim of the silver part of the case around the mechanism: “Argent”. The porcelain face is not marked and shows no damage. The hands appear to match. The chain is gold colored metal, and is likely gold filled. The key is steel, with some surface rust. In 24 hours it gained about 4 minutes. We did no adjustments. We only wound it, and set it. Please review the photos for further information on the condition. We believe the watch may have belonged to the man in the following article. A piece of paper is in the watch that says Property of W. Because of the age of the watch he would have not been the original owner. Walter Hermann Bucher (March 12, 1888 February 17, 1965) was a German-American geologist and paleontologist. He was born in Akron, Ohio to Swiss-German parents. In 1911 he was awarded a Ph. By the University of Heidelberg with a focus on geology and paleontology. And joined the University of Cincinnati as a lecturer. By 1924 he was a professor of geology at the institution. His early works were on paleontology, and he performed studies of stromatolettia, oolites, and ripple-shaped markings. Later he concentrated on the Earth’s crust diastrophism problem and proposed firstly (immediate and independent[clarification needed] with Mikhail Tetyaev) the pulsation hypothesis of the Earth developing. In 1935 he became president of the Ohio Academy of Sciences. In 1940 he joined the Columbia University, specializing in structural geology. It is thought that at this time he worked as a consultant on the Manhattan Project, hypothesizing how the detonation of the atomic bomb could affect the Earth’s crust. In the same year he joined the National Research Council, as a consultant as chairman of the Division of Geology and Geography. In 1946 he was elected president of the New York Academy of Sciences, and from 1950 until 1953 he served as president of the American Geophysical Union. He was also president of the Geological Society of America (1955) and received their Penrose Medal in 1960. From 1920 onward, Bucher was noted for his studies in cryptovolcanic structures, significant deformations of the crust of the Earth, and structural geology. He died in Houston, Texas. The item “Antique HUGUENIN & CO Coin Silver Hunter’s case pocket watch with key & chain Runs” is in sale since Friday, May 1, 2020. This item is in the category “Jewelry & Watches\Watches, Parts & Accessories\Watches\Pocket Watches”. The seller is “thisidisnotmyaddress” and is located in Beverly Hills, California. This item can be shipped to United States, Canada, United Kingdom, China, Mexico, Germany, Japan, France, Australia, Denmark, Romania, Slovakia, Bulgaria, Czech republic, Finland, Hungary, Latvia, Lithuania, Malta, Estonia, Greece, Portugal, Cyprus, Slovenia, Sweden, South Korea, Indonesia, Taiwan, South africa, Thailand, Belgium, Hong Kong, Ireland, Netherlands, Poland, Spain, Italy, Austria, Bahamas, Israel, New Zealand, Singapore, Norway, Saudi arabia, Ukraine, United arab emirates, Qatar, Kuwait, Bahrain, Croatia, Malaysia, Chile, Colombia, Costa rica, Panama, Trinidad and tobago, Guatemala, Honduras, Jamaica, Barbados, Bangladesh, Bermuda, Brunei darussalam, Bolivia, Egypt, French guiana, Guernsey, Gibraltar, Guadeloupe, Iceland, Jersey, Jordan, Cambodia, Cayman islands, Liechtenstein, Sri lanka, Luxembourg, Monaco, Macao, Martinique, Maldives, Nicaragua, Oman, Pakistan, Paraguay, Reunion, Uruguay.